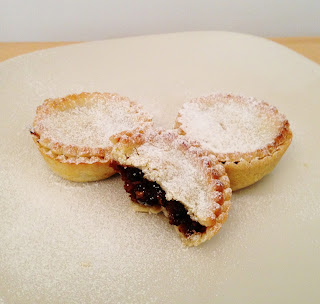 1.  Place the raisins, sultanas, apple, mixed fruit, mixed peel and lemon zest into a blender a blitz to a paste.  Place in a bowl and add the suet, sugar, currants, cinnamon, nutmeg, mixed spice, ground ginger, brandy and sherry.  Mix together well and set aside.  This mincemeat can be stored in a dark, cool cupboard for up to a year.

2.  For the pastry, place the flour, sugar, almonds and butter into a food processor.  Blend until it resembles breadcrumbs and slowly add the egg.

3.  Bring the mixture together with your hands, wrap in cling film and place in the fridge for an hour or so.

5.  Thinly roll out the pastry onto a floured surface.  Cut out 12 circles with a fluted pastry cutter, large enough to fill the base of the prepared tin. Press gently into each hole, then fill with the mincemeat.

6.  Cut out another 12 slightly smaller discs and use to cover the mincemeat. Press the edges together to seal. Make a small slit in the top of each, then brush lightly with milk. Chill for about 30 minutes. Meanwhile, preheat the oven to 200°C/400°F/Gas 6.

7.  Bake the pies for 20 minutes until golden brown. Remove to a wire rack and serve warm with brandy butter.

the Best Recipes
I've been eating, sleeping and living food since I started developing the best recipes - not that I had food out of my mind for long before then. I wake up in the morning thinking what to cook for dinner. Once I've finished eating one meal, I'm wondering about the next. Lets share our favourite recipes... this is the page for people that appreciate the best food & drink!